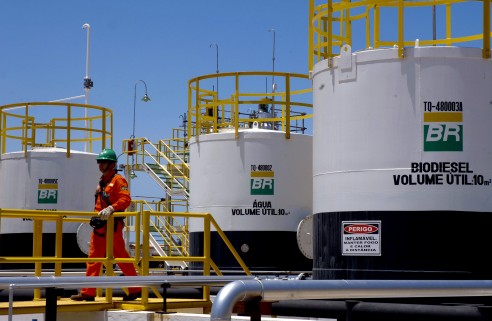 Although its stocks are negotiated in the international markets, Petrobras is a Brazilian oil company mostly owned by the Brazilian Treasury. The company was founded in 1953 by former president Getulio Vargas to provide the government with oil production security.[i] Oil security would assure the country’s industrial progress in a complex geopolitical environment after the Second World War.

Recognized by its cutting edge technology, Petrobras developed the essential expertise to extract from oil shale. The company has also become the world leader in advanced technology to extract oil from deep-water and ultra-deep water.[ii] Recently, it discovered a reserve of oil and natural gas in the pre-salt layer, which is an 800 km offshore area between the Brazilian states of Espirito Santo and Santa Catarina.

Currently, Petrobras controls oil and energy assets in 18 countries besides Brazil[iii], and has 86,108 employees and a market cap of U$ 86.79 billion.[iv] These facts represent an impressive evolution for a company that had to cope with the ups and downs of the Brazilian economy, the military dictatorship, and the redemocratization process.

Petrobras is a very efficient and profitable company that was considered a national pride and a successful business model for several years. Such excellence was praised in 2000 when the Brazilian government incentivized workers to use their Severance Fund (FGTS) to buy company’s equity.[v] With major public (national and international) adoption of this program, the company’s merits were greatly recognized in 2010 when Petrobras performed the greatest capitalization process in world’s history at the time.[vi] This system allowed Petrobras to become the largest open-capital oil company in the world in January 2015.[vii]

Petrobras has been borrowing money from banks and other institutions to increase production, grow international participation, and improve technology. As a result, Petrobras has become one of the most leveraged oil companies in the world. This borrowing process is standard for companies in expansion and, when well administered, leads to good results.[viii] However, a major political scandal of money laundry and bribery to politicians and construction companies hit the company in 2014.[ix] This scam resulted in several investigations that are taking place not only in Brazil but also in countries where Petrobras stocks are negotiated. These investigations and the distrust embodied therein are negatively influencing the ability of the company to refinance its short-term debt. To aggravate the company’s situation, oil prices have been consistently falling throughout the years, pushing operations to the edge of unprofitability.[x]

Petrobras is currently facing a major administration and political crisis. The company that was once a business model to be followed and a national pride is now in the spotlight of investigative news and viewed with mistrust. Petrobras businesses might become unprofitable if oil prices continue to fall. Furthermore, the company may not have enough cash flow to finance its operations due to its inability to refinance its short-term debt. On top of the aforementioned problems, the political scandal and the manipulation of the company by its majoritarian stakeholder is deepening the crisis and worsening chances of fast recovery.

To exemplify the disastrous consequences faced by investors, the return of those who used their FGTS to invest in Petrobras equity and held it until 2015 was negative 37.32%, while those that sold it in 2010 earned a positive 900%.[xi] What once was a sign of protection and economic well-being is now becoming an international takedown that is not only hurting the Brazilian economy but also the country’s pride. For now, it is only a matter of hoping for a quick turnover.

Marcus Vinicius Tenente Ahmar is pursuing his Master of Public Administration in Development Practice at the School of International and Public Affairs (SIPA) at Columbia University.