Brazil is a blessed country. We have no hurricanes, no earthquakes, no harsh winter. We have the largest tropical forest in the world, the Brazilian Amazon, which amounts for around 5 million square kilometers, and hosts an unparalleled biodiversity[i]. Moreover, Brazil also has 12% of the world’s freshwater, more than the European or the African continents. It is fair to say that when it comes to natural resources, we are an extremely lucky country. But we are ruining it. Little by little, with years of neglectful environmental policies, we are ruining it.

The recent environmental disaster in Mariana blatantly showcases the results of the Brazilian government’s actions – or, rather, lack thereof. Mariana is a small town in the mineral-rich state of Minas Gerais, with 60,000 inhabitants. It is home to an iron-ore mine, whose activities are carried out by Samarco, a joint venture between Brazil’s Vale do Rio Doce and BHP Billiton of Australia[ii]. Unfortunately, on November 5th, these activities took a disastrous turn: the damn that stocked chemical waste from the operations broke, and approximately 1.8 billion cubic feet of mud were released, which represents the equivalent of around 20,000 Olympic pools[iii]. The consequences of such disaster have been catastrophic, exceeding even the most pessimistic forecasts.

Immediately after the accident, Bento Rodrigues, one of the city’s districts, was completely wiped out by the avalanche. Most houses were destroyed, more than 600 people were displaced and left homeless, 13 people were killed, and 8 are still missing[iv]. 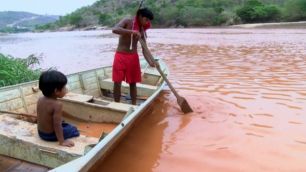 Over the course of the following weeks, the damages were even more catastrophic. The toxic mud went down River Doce, killing 11 tons of fish so far[v], and depositing elements such as arsenic in the river’s water[vi]. Because the mud contaminated rivers and the region’s water, it also forced municipal governments of cities along the river’s margins, such as Governador Valadares, to cut water supplies to their citizens. Furthermore, the disaster also affected the area’s revenue, since fishermen from these cities are now incapable of making a living: The river is simply dead.

To make things worse, the river was not the only watercourse affected: the sea will also be contaminated soon. The toxic mud has now reached River Doce’s basin, invading the Atlantic Sea. It was an environmentally protected area, where sea turtles deposited their eggs, in addition to being a home to many other endangered species[vii].

As to reparation and damage control, neither the government nor the company has done much so far. Samarco has been trying to contain the mud from spreading further, but without much success. The government has merely distributed bottled water to the affected cities, and has been monitoring the situation. It is important to recognize that, after the repercussions of the disaster and public outcry, the government has recently decided to sue Samarco for U$5.2 billion to pay for the damages generated. The deed, however, is done. Regardless of how much money is spent in recovery, the impacts of the disaster will be felt for decades to come[viii].

The Amazon forest is another area of concern because of the environmental neglect by the Brazilian government, even though some advances have been achieved in the last decade. In 2005, the Minister of the Environment at the time, Marina Silva, implemented a comprehensive and innovative plan of deforestation prevention and control. It encompassed three ministries, the federal police and the military, and it used advanced satellite technology for real time monitoring of the forest. The action plan was a great success: from 2004 to 2014, the deforestation rate fell 82%[ix]. Of course the ideal rate is zero, but it seemed as if the country was in the right path to achieving it.

Increasing deforestation can be partially explained by the new Forest Code, which has been recently approved by Congress. The law has been criticized by many experts for being a setback in terms of preservation, but, in the midst of an economic crisis, the President has done little to respond to environmental concerns[xi].

Now, in preparation for the COP21 in Paris, Brazil has presented in its Intended Nationally Determined Contributions (INDC) the promise to stop illegal deforestation in the Amazon – but only by 2030[xii]. As much as Brazilian commitments have received compliments when compared to other countries’, many environmentalists find that the INDC falls short of the country’s needs and action capacities. In an event in New York City last November, former Minister of the Environment Marina Silva summed up well the problem with the government’s policy: “One cannot promise to have 15 years of deforestation. It is like combatting violence – how could we say that the Brazilian population will suffer homicides for the next 15 years, and only then we will commit to ending it?”.

It is, overall, a dreadful, calamitous situation. Finding a silver-lining or a more hopeful perspective might seem impossible at a first glance. Nonetheless, on the verge of the COP21 negotiations, it is imperative that we try and see past the muddy immediate future. As catastrophic as it is, Mariana might teach us a lesson and have us questioning: what are we doing to our country, and to our planet? And, as importantly, how much more can it take?

As it becomes increasingly clear, not much. From my end, I will continue working for a more sustainable and lively world, while desperately hoping that negotiations in Paris have a positive outcome. Unfortunately, whether negotiations are successful or not, the Brazilian government has left its citizens with one mournful reality: it is already failing us at home.

Isabela Messias is a Master of International Affairs student concentrating in Economic and Political Development at the School of International and Public Affairs (SIPA), Columbia University.