by: Fernanda Nogueira and Mario Saraiva

On October 27, Brazil Talk in the company of Brazilian students at Columbia University was invited to visit the Brazilian Mission at the UN in order to learn more about this massive and at times veiled organization. Members of the Mission exposed the actions Brazil is undertaking at the UN and discussed the role of international organizations in different developmental challenges in Brazil. We’ll aim to highlight the main learning points from the visit.

It was startling to realize how little we know about what exactly entails the work of the UN. The UN is a complex organization.

Regardless if it is a glorification of its goals or a condemnation of its practices, there is a sense of curiosity about the UN – think of how it is portrayed in the media, even in movies such as The Interpreter and The Constant Gardener. In more specialized settings, that interest spikes higher, with Model UNs spreading in colleges and schools around the world as people dream of global peace. Never in the history of humanity, have we had such a universal organization; with 193 sovereign states, almost every country in the World is a UN member.

To provide us with context the Brazilian Mission presented a very enlightening chart summarising the different organizations that work within the UN umbrella. 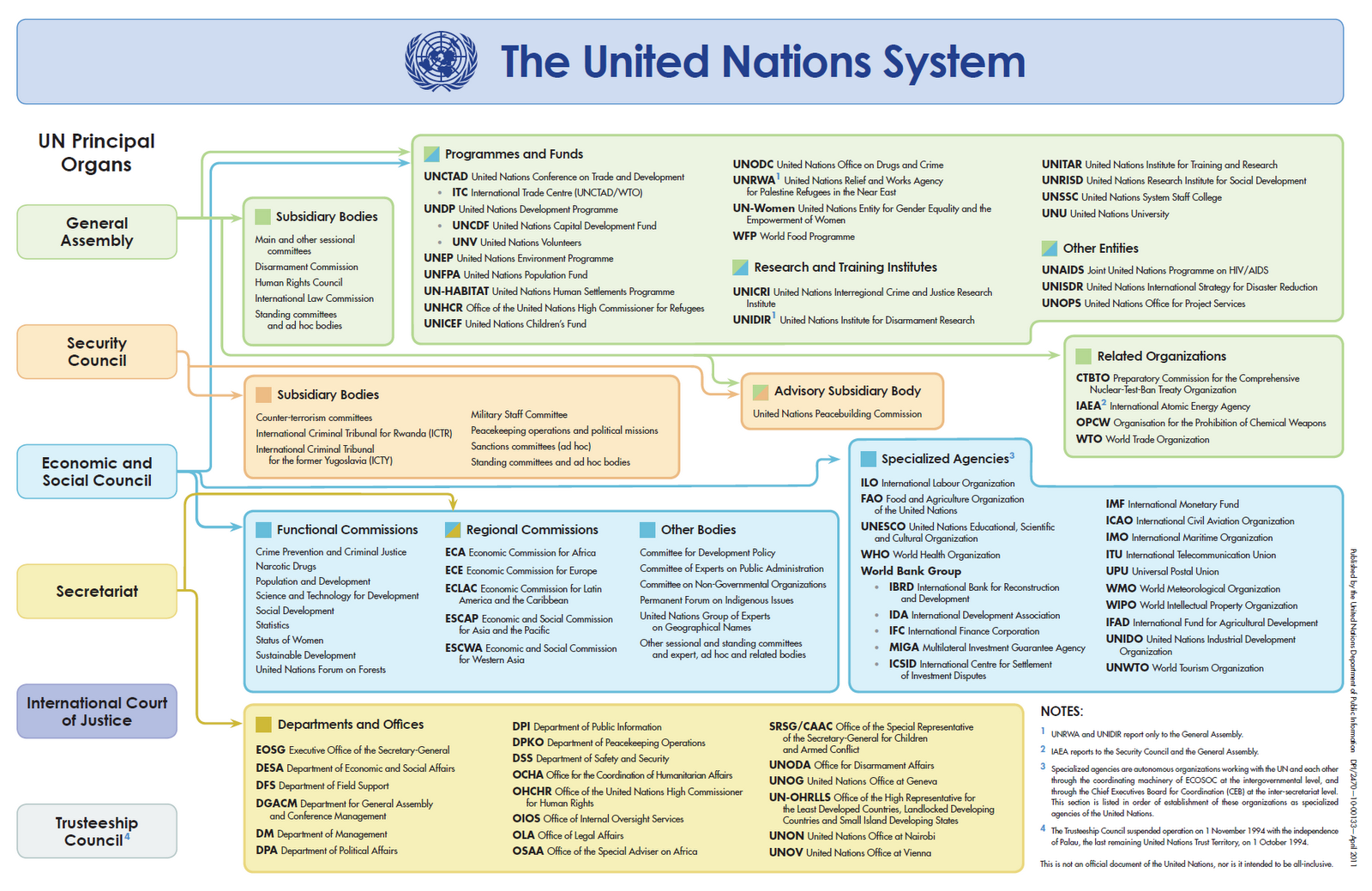 Brazil in the United Nations:

Brazil was present at the birth of the United Nations; Brazilian diplomats and generals (the country was under a dictatorship at the time) signed the UN Charter in 1945, alongside representatives of other 25 nations, thus creating the UN. You can see their signatures in the document below.

The relevance of the last signature can almost pass unnoticed – Bertha Lutz, a Brazilian zoologist, politician, and diplomat, was one of the four women in the entire conference. In a room with more than 200 people, a proud female voice made history by representing Brazil in the signing of the UN charter.

Another less-known issue to “non-UNers” is that Brazil almost made it to the Security Council in 1945. The United States suggested Brazil be a representative for Latin America (a topic that is still under debate today when talking about the Security Council reform). Nevertheless, Russia opposed the idea of increasing the membership of the Council and Brazil was never admitted.

Brazil’s main activities in the UN, apart from negotiating and voting on different resolutions, were in the space of international peace and security. Truly, Brazilians have demonstrated international leadership when dealing with peace operations. Recently, Brazil played an important part in the negotiation of the Nonproliferation of Nuclear Weapons Treaty.

Brazil Talk also learned that the Brazilian Institute for Geography and Statistics (IBGE) led the beginning of the research on the Sustainable Development Goal indicators.

So why is it that we know so little about the UN and the Brazilian Mission? One possibility is the depiction of its work, making it appear unattainable to many people. Another possibility is the language: with almost a dialect of their own; documents made public contain important content that is sometimes incomprehensible to the layman reader, who perceive it as riddled with technical jargon.

There is also a question of the necessary qualifications to work in this environment – almost all of the jobs require people to be career diplomats, meaning that one has to pass the dreaded Instituto Rio Branco exams (similar to the Foreign Service Officer Test). Additionally, the lack of international experience plays a pivotal role for acceptance into the test, and in an increasingly unequal society, is only reserved for a few.

Moreover, an important lesson that is often misunderstood is that the UN was created for political reasons and is, therefore, an institution of that nature. Although many might not agree, politicians, in general, have a hard time being succinct and combining different perspectives into concrete solutions for today’s very real issues. Perhaps there is a mismatch between what is expected and what is actually achievable by such kind of organizations – leading to the perceived overall frustration with its results.

Nevertheless, Brazil Talk and participating Brazilian students left with a positive image of the Brazilian Mission at the UN, specifically regarding the importance of their work, and competent, relatable personnel. Their interest in our visit and effort on making the UN closer to the people only shows that the issues discussed above are not only on their radar but also included in their action plans. The Mission has made excellent initiatives such as a Youtube channel, with short video interviews of their personnel explaining their work, their main results and how to collaborate. Hopefully, we will see a more approachable and collaborative organization with increasing ambitions to lead our society one step closer to making the world a better place.

The San Francisco Conference, 25 April – 26 June 1945: Brazil Signs the United Nations Charter Dr. Bertha Lutz, National Museum, President of the Confederated Association of Women of Brazil, former Congresswoman and member of the delegation from Brazil, signing the UN Charter at a ceremony held at the Veterans’ War Memorial Building on 26 June 1945.