This article is part of Brazil Talk’s 2018 Elections Series  and is intended to give our readers a deeper understanding of the Brazilian political system, its complex electoral process and gather diverse perspectives and opinions on what the world should expect from Brazil in the upcoming months and the future of the country at the beginning of 2019.

Brazil’s upcoming elections will not be the first one to be held in the new Brazilian political system, as was expected. On the contrary, it will be the last one of the current political period – which began in 1982 when the first direct elections for governors took place after the military regime. The President of the Republic as well as Governors for the 26 States and the Federal District will be elected by a majority of votes on a two round system on two separate occasions provided no candidate gets a majority in the first round. Two Senators will be chosen for each State, by simple majority in a single round on the same day the President and Governors. On the same day, the elections for the Federal Chamber of Deputies and the 27 state Assemblies will take place. The members of these Assemblies will be chosen by a less than common system. The votes are counted in Party Lists, but given individually for the candidates- a system called Open Party List.

Party coalitions are allowed throughout the elections, adding TV and radio time to their campaigns according to the number of Federal Deputies elected in the 2014 general elections.

Despite a few small changes made by Congress as well as several interpretations from the Supreme Court, rules, campaign periods, use of media and financing will remain roughly the same as in the last nine general elections.

TV and radio ads will run from August 26th to September 29th in a 25-minute program twice a day in the first round of elections. In the second round, time will be equally shared between the two candidates. The “Center Right” parties will share 27% of the time, the “Left” about 20% and the considered “Center” parties will use the 52% remaining time. The number of candidates and the subsequent elected members for the Lower House will be proportional to the States’ population, with a minimum of 8 and a maximum of 70 candidates per state.

The voters – whose votes will be counted individually – are roughly distributed as follows: 22.5% from the State of Sao Paulo, 21% from the other 3 southeastern states, 27% coming from the 9 northeastern states, 14.5% from the 3 southern states and the remaining from the 6 northern and 4 mid-western states, (counting the Federal District. The voting population is for the most part economically active, lives in medium-size cities in poor conditions in which only 11% of the families earn more than 5 minimum wages.

Our 35 active political parties will probably gather under 15 to 19 coalitions; those will submit about 30,000 names for Deputies, 600 for Senators, 300 for Governors and some 17 for President. The 513 chairs of the future House of Representatives will be distributed among the parties and none of them will have more than 60 deputies; the future Senate will have about the same proportion. The new members of the two Houses will be known on October 8th, as well as some Governors (those elected in the first round). The President will only be announced on October 29th.

What could be the results of the upcoming Presidential election? Following general guidelines and a modest opinion I believe candidates may be classified as liberal and anti-liberal. Each ideological current will be represented in the second round of voting. Surprises are possible given the national scenario of economic difficulties, the public safety situation and the “Carwash Operation” developments. The three month pre-campaign period will be filled with political arrangements and negotiations in an effort to form the various coalitions, as well as organize the parties’ conduct for the likely second round of voting. The expected political reforms will therefore most likely take place under new regulations at the 2022 general elections. 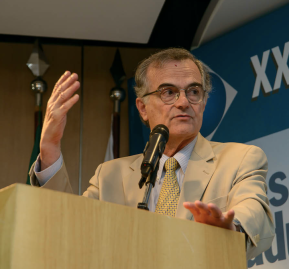 Marcio Fortes is a visiting scholar at the Center on Global Economic Governance at Columbia University. He is a former Congressmen (PSDB/RJ) and former president of Brazil’s development bank (BNDES).